Taga Bike has 3 Wheels and is Designed for Family Activity

Taga Bikes is building a new type of bike that has three wheels and can be used to carry children, groceries and many other bulky items.  You can use the Taga 2.0 bike to run errands to the grocery store, pick up the children after school, carry your dog and and transport your beach equipment.  The Taga 2 bicycle provides a StableTurn steering mechanism, DualBar handling, an adjustable child seat, a cargo box that can be locked, has ebike available, and can be folded and stored easily. 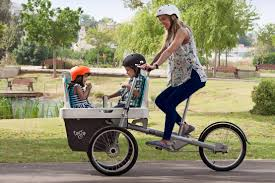 Taga was influenced by the 3 wheel Dutch cargo bikes, or box bikes, that carry a wooden box in the front.  Its first version included a baby seat in the front so it acted as stroller that could be pedaled by mom or dad.  Taga grew in popularity as people saw it as an eco-friendly way to transport family members and liked the fact that it could be folded up and taken on a train or bus.  The newest Taga bicycle takes the concept one step further by introducing a cargo holder that can be used not only to carry children but a variety of other items as well.

So far Taga 2.0 Bike has raised $1,863,397 through a Kickstarter crowdfunding effort for its bicylce.  The Taga bikes small business commenced crowdfunding in May 18, 2016 and exceed its fundraising goal of $100,000.  It currently has over 1,700 backers and is expected to conclude its campaign in the middle of July.

Taga Bikes established reward tiers for its crowdfunding supporters, like:

Taga Bikes is situated in New York, NY and was started up by Taga USA in 2009.