Arctic Cold Brew allows you to make coffee in your refrigerator in less than 24 hours.  The Arctic coffee maker was developed by Icosa Brewhouse and comes with a carafe made from borosilicate glass, micron filter and stainless steel lid.  The arctic cold brew coffee maker is designed to be eco-friendly because it doesn’t require paper cups, cardboard sleeves or plastic tops like Starbucks.  Also it makes 12 cups of coffee at a time which can be stored for up to two weeks in the refrigerator. 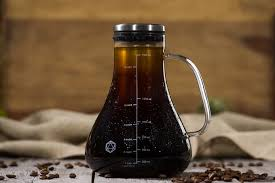 Arctic cold coffee maker brews coffee that has more caffeine by volume than regular hot coffee.  To use the cold coffee brewing system, simply add coffee to the micron filter and then pour in cold water.  Once the water has been added to the carafe, it is then placed in a refrigerator for 12 to 24 hours.  This maker of cold coffee allows the user to control many aspects of the coffee brewing process, including bean type, roast level, brew time, water to coffee ratio, taste, aroma and level of caffeine.

So far, Arctic Cold Brew raised $227,918 through a Kickstarter crowdfunding campaign for its coffee maker.  The Arctic Coffee Maker company started fundraising on November 23, 2016 and reached its initial funding goal of $15,000 in under 72 hours. ICOSA Brewhouse created stretch goals for reaching $75,000 in funding — every Arctic coffee system backer will received a stainless steel coffee scoop.

ICOSA Brewhouse created multiple reward levels for its backers, including:

ICOSA Brewhouse is headquartered in New York, NY and its Kickstarter crowdfunding campaign is scheduled to end on January 6, 2017.