The Next Gen Launch Bindings for snowboards make it easier for snowboarders to strap on their boards.  These snow board bindings were created by Launch Snowboards and pop up and around the boot when a snowboarder steps in them.   This should allow the snowboarder to attach their bindings without sitting down in the snow to put them on.  The Next Gen Launch Bindings are made of plastics instead of metal so they are lightweight. 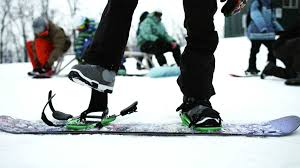 The Launch bindings were created by Jon Callahan who founded Launch Snowboards.  In addition to these bindings, Launch also provides men’s and women’s snowboards and clothing.  The company states that their Next Gen bindings are more comfortable and easier to use than traditional snow board bindings.  The Next Gen bindings also save snow boarders time because they no longer have to sit down to put their bindings on.

Launch Snowboards is located in New York, NY and was launched by Jon Callahan.