Wazer Waterjet Cutter is a water jet that cuts through many materials using high pressure water.  The waterjet was created by Wazer and can cut through materials including glass, stone and metal with intricate detail.  Since it uses water, the surfaces it cuts are smooth after cutting and it prevents materials from warping due to excessive heat.  Wazer mixes abrasive sand-like particles called “garnet” with a pressurized water stream to cut through materials. 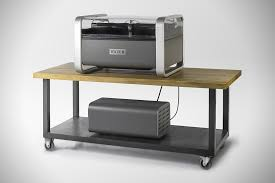 The Waterjet by Wazer was created by Nisan Lerea and Matthew Nowicki and is the initial product being developed by their business called Wazer.  The company says that the waterjet will cut through any material and make precision cuts using its digital interface.  The Wazer water jet cutting machine is targeted at manufacturers that design custom parts that are sourced locally.

While large commercial waterjet cutters have been available for a long time, their $100,000 plus price tags put them out of reach of most small business owners and hobbyists.  The Wazer waterjet cutter is much more affordable and should be around $5,000 once it’s launched.  Another nice aspect of this pressurized this water cutting tool is that the noisy pump has been separated from the cutter and can be placed in another room or outside.

So far Wazer Cutter has raised more than $1.1 million through a crowdfunding campaign on Kickstarter. The Wazer waterjet started crowdfunding on September 12, 2016 and made its $100,000 fundraising goal in less than 24 hours.  Since this campaign will be running for another 44 days, expect the Wazer Waterjet Cutter to raise a lot more money.

Currently the Wazer early bird special for $3,599 and the first batch of Wazers for $3,999 have been sold out.  However there are still plenty of Wazers to be had for $4,499 in the second batch.  To date there are 811 backers and there are 44 days left in the crowdfunding campaign –which will end on November 11, 2016.

Wazer is situated in New York City, New York and was started up by Matthew Nowicki and Nisan Lerea in 2016.