ODIN2 is a small projector that can be used to show movies, video calls and other apps. The Odin 2.0 video projector is being developed by Dos Owls and delivers a large video picture experience with the convenience of an Android tablet.  ODIN2.0 is a portable standalone device that can be used to show content from Hulu, Amazon Prime, Netflix and other mobile applications.  In other words, it does not have to be connected to your smartphone or other smart device to be fully functional.  Think of it as a tablet with a built in projector. 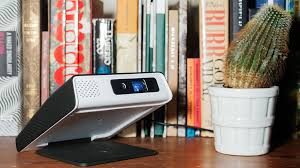 The ODIN projector was created to eliminate the restrictions of small screen viewing, like sharing videos, by allowing the user to project larger images on a wall, ceiling or movie screen.  The ODIN allows a user to turn their personal content into a social experience with the convenience of a tablet form factor.  It comes with an Android operating system and has WiFi and Bluetooth connection availability.   ODIN 2.0 allows you to browse the Internet with a touch screen interface, has a built in camera, microphone and speakers.  The device also comes with 2 USB ports, a micro SD card slot for memory card, and HDMI and headphone hookups.

ODIN2 was developed by entrepreneur Alex Yoo.  Prior to starting Dos Owls, Alex worked as an investment banker and then started a custom clothing company called Alexander West.  The Dos Owls Company says that the Odin 2 can be used to make video calls with Skype and Google Hangouts, allows you to mirror your iPhone or Android smartphone screens, and play Microsoft xBox and Sony Playstation games.  The ODIN2 is the second product from Dos Owls and incorporates all of the user feedback that was received at the launch of the Odin 1 video projector.

There are other small or mini projectors that can be used to display your smartphone content.  For instance there is the Miroir MP30 that is lightweight and can be carried in a bag, purse or even a large pocket.  It has the ability to stream movies from a smartphone, tablet, Roku, Amazon Fire or Apple TV.  The MP30 projector comes with a rechargeable battery that lasts for a couple of hours and has a built in speaker.  There is also a jack to plug in external speakers. 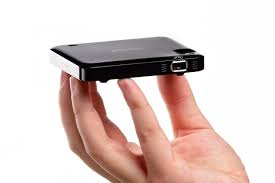 AAXA also makes a line of portable smartphone projectors, including the LED Pico Pocket Projector that costs $119 and is the size of most cell phones.  This tiny projector produces high quality images even when they are enlarged to up to 60 inches.  It comes with HDMI up to 1080p, USB and a micro SD reader.  Unlike traditional projectors that require frequent bulb changes, the Pico projector uses LEDs that can last 10 times longer.

What differentiates the ODIN 2.0 projector for other pocket projectors, like the Miroir and AAXA Pico projectors, is that it is a fully contained standalone unit that does not need to be connected to a smartphone or other video streaming device to project images on to a larger screen.

Fundraising for the ODIN 2.0 Smart Projector

So far DosOwls has raised $180,345 through a Kickstarter crowdfunding effort for its ODIN 2 video projector.  The Dos Owls startup commenced crowdfunding in November 1, 2016 and made its fundraising goal of $125,000 two days later on November 3, 2016.   Dos Owls announced stretch goals for its crowdfunding campaign that include the following:

At the time of publication, there were still 17 days remaining in the crowdfunding campaign, so it’s possible they will achieve at least their first goal of including the KODI application.

Dos Owls established reward tiers for its crowdfunding supporters, like:

Dos Owls originally created the ODIN1 in 2014 after launching a crowdfunding campaign on Kickstarter that raised $268,192 and narrowly surpassed its funding goal of $250,000.   The original ODIN was also an Android based multi-functional portable visual device that was battery powered and connected to the Internet wirelessly.  It allowed the user to stream video from the device’s internal memory, USB drive and apps.

The ODIN2 added many new features, including:

ODIN 1 was created after the inventor Alex Yoo cancelled his pay television subscription service and then became dissatisfied with his viewing experience.  He was left connecting a bulky projector to his computer and attaching external speakers.  To solve this problem, he decided to create a portable device that could connect to streaming services like Hulu, Netflix and YouTube and then project the video content onto a larger screen or living room wall.

Dos Owls is situated in Brooklyn, New York and was started up by Alexander C. Yoo in 2014