Field Company is developing cast iron skillet that is lighter than traditional frying pans.  Field pans can be used over hot coals, on an induction cooktop and comes with a non-stick surface that is designed to get better over time. Field skillets offer heat retention, is as light as a 13″ Apple MacBook pro lap lop computer, comes fully seasoned and polished, has a simple handle, is made from re-cycled iron so it is eco-friendly, and has a lifetime guarantee. 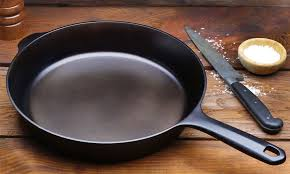 Field Skillet raised $1,633,361 through a Kickstarter crowdfunding campaign for its light frying pan.  The Field Company company started fundraising on March 6, 2016 and completed its campaign with the help of 12,553 backers.  Field needed to raise the money because the tooling required to manufacture the skillet is very expensive.  The company used 3D printing to make trial molds.

Field Company created multiple reward levels for its backers, including:

Field Company is headquatered in Brooklyn, New York and was founded by Stephen and Chris Muscarella in 2015.